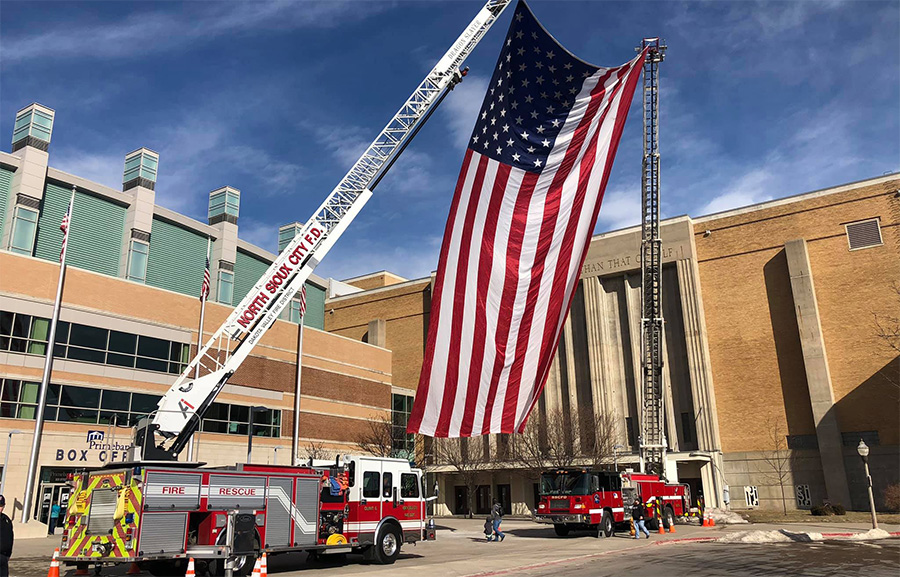 North Sioux City Fire Department is in Southeastern South Dakota and proudly serves the Dakota Valley Emergency Services District. This district encompasses the City of North Sioux City, Dakota Dunes, the Big Sioux Township, and Wynstone. The community we serve is unique being a tri-state area which brings in a daily influx of persons for employment from Iowa and Nebraska. Our District is an area of residential homes, industrial and commercial operations, along with one large lake and two rivers. North Sioux City Fire Department serves an area of 25 square miles and 9,000 people, with increases of about 6,000 that come in daily for work, which makes our daytime population around 15,000 people. We provide protection to nearly 1 billion dollars’ worth of property. North Sioux City Fire Department maintains mutual aid agreements with 12 other fire departments in our area, which enlarge our protection area by 1200 square miles and 115,000 people.

North Sioux City Fire Department is a combination organization with two stations, 24 volunteers, and 9 paid paramedics. Our mission is to minimize the loss of life and property resulting from fire, medical emergencies, and other disasters. We accomplish our mission through prevention, education, fire suppression, medical services, and other activities. We have two engines, one aerial apparatus, one rescue pumper, two ambulances, three brush trucks, and three additional support / command vehicles. Our firefighters are trained in structure and wildland fire suppression, EMS, hazmat and rescue at the technical level, vehicle extrication, ice and water rescue, and grain bin rescues. Each year we respond to approximately 700 calls for service, which has been steadily increasing.

Our area has substantial growth and has been thriving with several new businesses coming into the area, and more residents moving into the district. The amount of property we protect is nearing 1 billion. Our growth last year was 7 percent in the district, which includes residential, but also large industrial/commercial properties. With the higher population and larger buildings, we have new risks we must adapt to in order to protect that new property.

A significant amount of high occupancy loads exist within the primary service area, including: